I love cooking and I love new recipes. This past weekend we had a potluck at church before watching the March 2014 General Women's Conference This gave me a perfect opportunity to try out a new recipe.

The inspiration for this came from Pioneer Woman but as usual, I made changes as I went.

First, the ingredients. No, Cheerios are not included. Think of it as a photo bomb and move on. The original recipe called for bread crumbs but I have always preferred cracker crumbs and I had a sleeve of saltines that someone had thrown into the wrong cupboard without a box. I also like my meat seasoned with more than just pepper and salt. I love my Thrive seasonings! For this recipe I used Italian Seasoning and Salad Blend. I also used Thrive Onions. Rounding out the seasoning is the old standbys, salt, pepper, and garlic. Finished off with slider buns, Hunt's garlic and herb spaghetti sauce and mozzarella cheese. 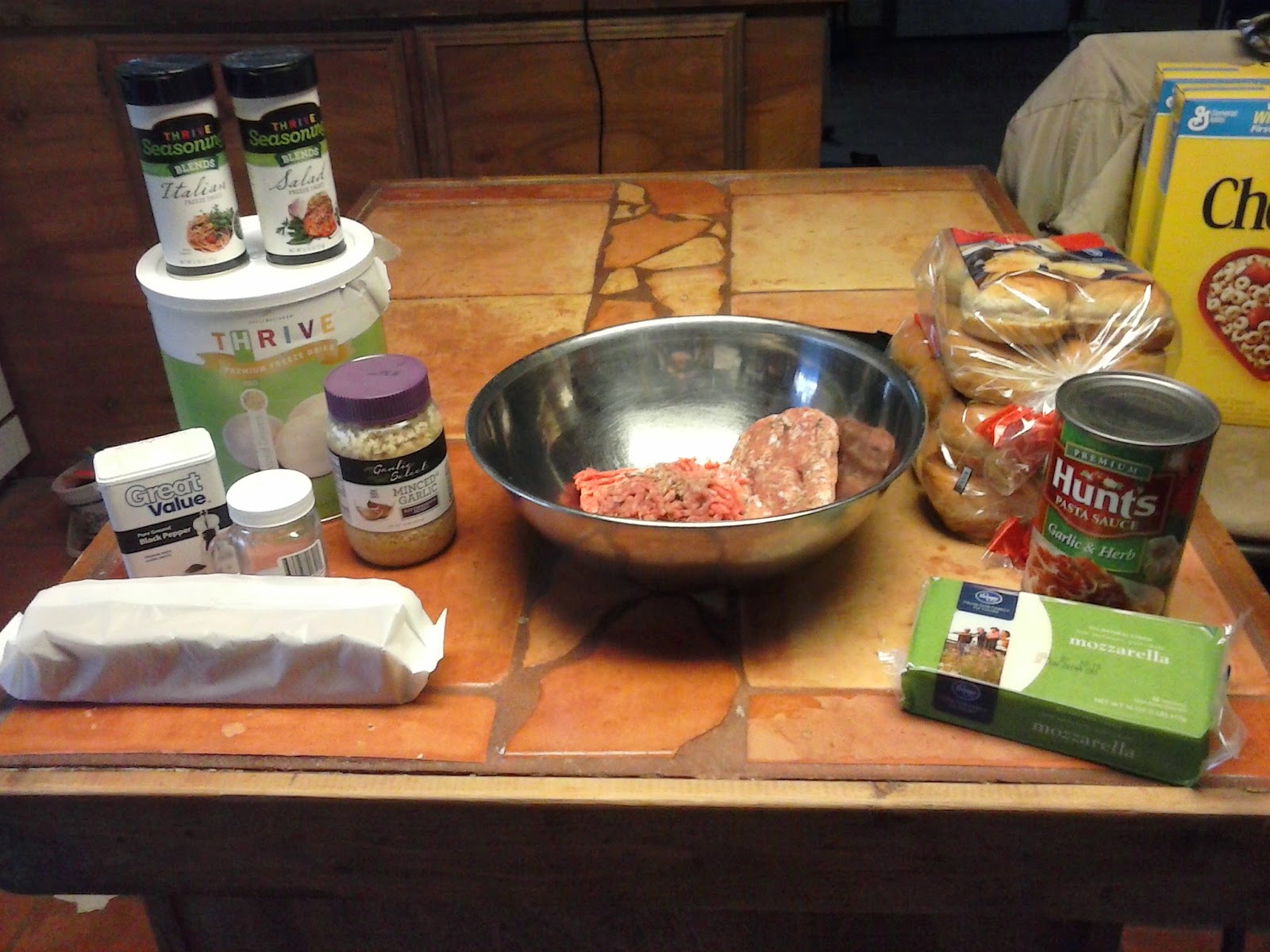 Let the fun begin!! You can't have meatballs without meat. This time around I used 1 lb ground beef and 1/2 lb of homemade Italian sausage. I seasoned my own pork the night before to let the flavors meld. I am trying to reduce the amount of chemicals I bring home from the store. Making my own seasoning blends for pork is just one more step towards that goal. I've also noticed that the ground pork I buy does not seem to have as much fat as the sausage I was buying. Double bonus! 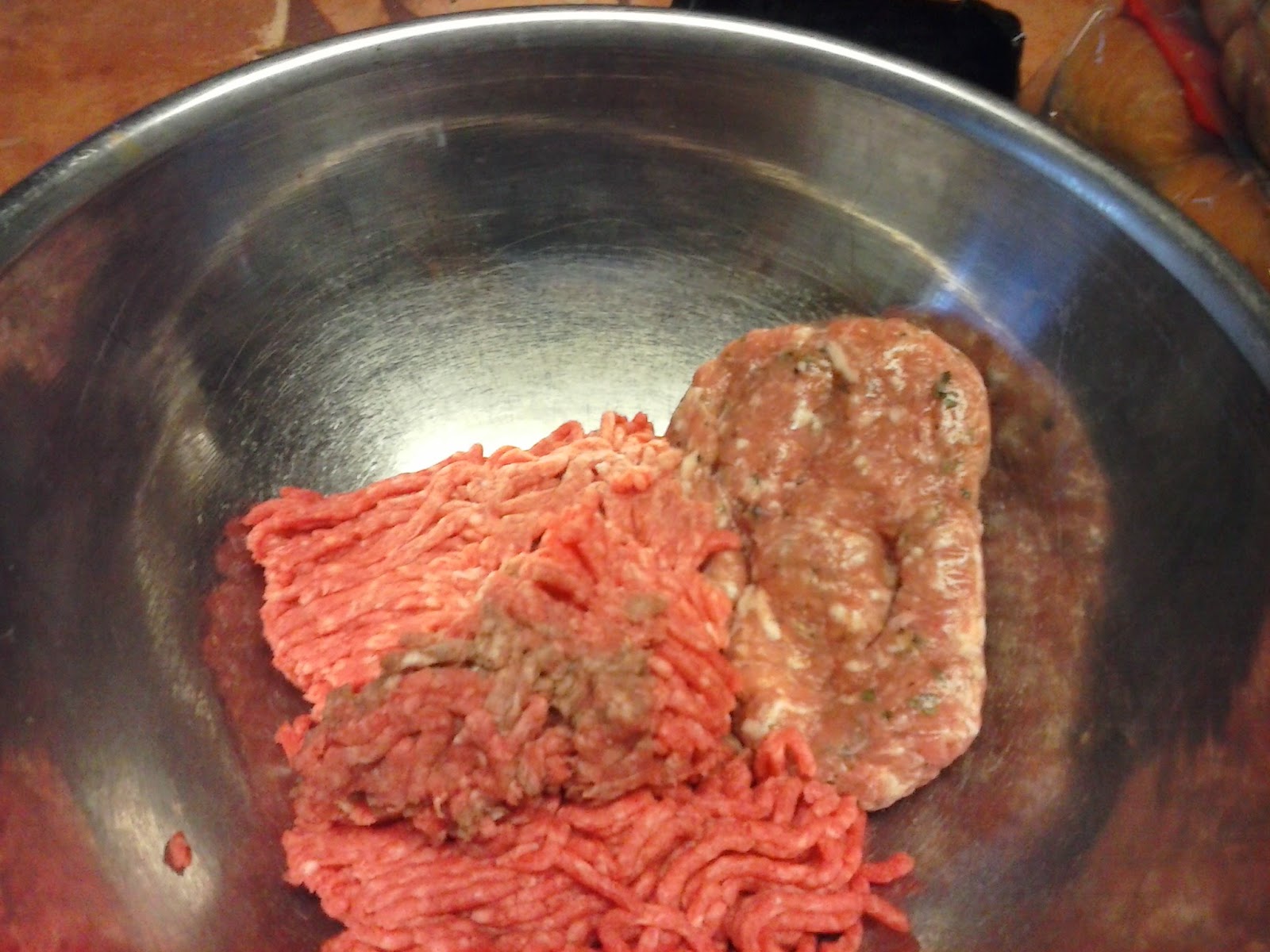 Next step was to add crushed crackers and then season to taste. I used minced garlic, Italian seasoning, salad blend with onions, parsley and chives, pepper and sea salt. The onions were saved for later in the process. I also added a little bit of milk and a fresh egg to help hold it all together. 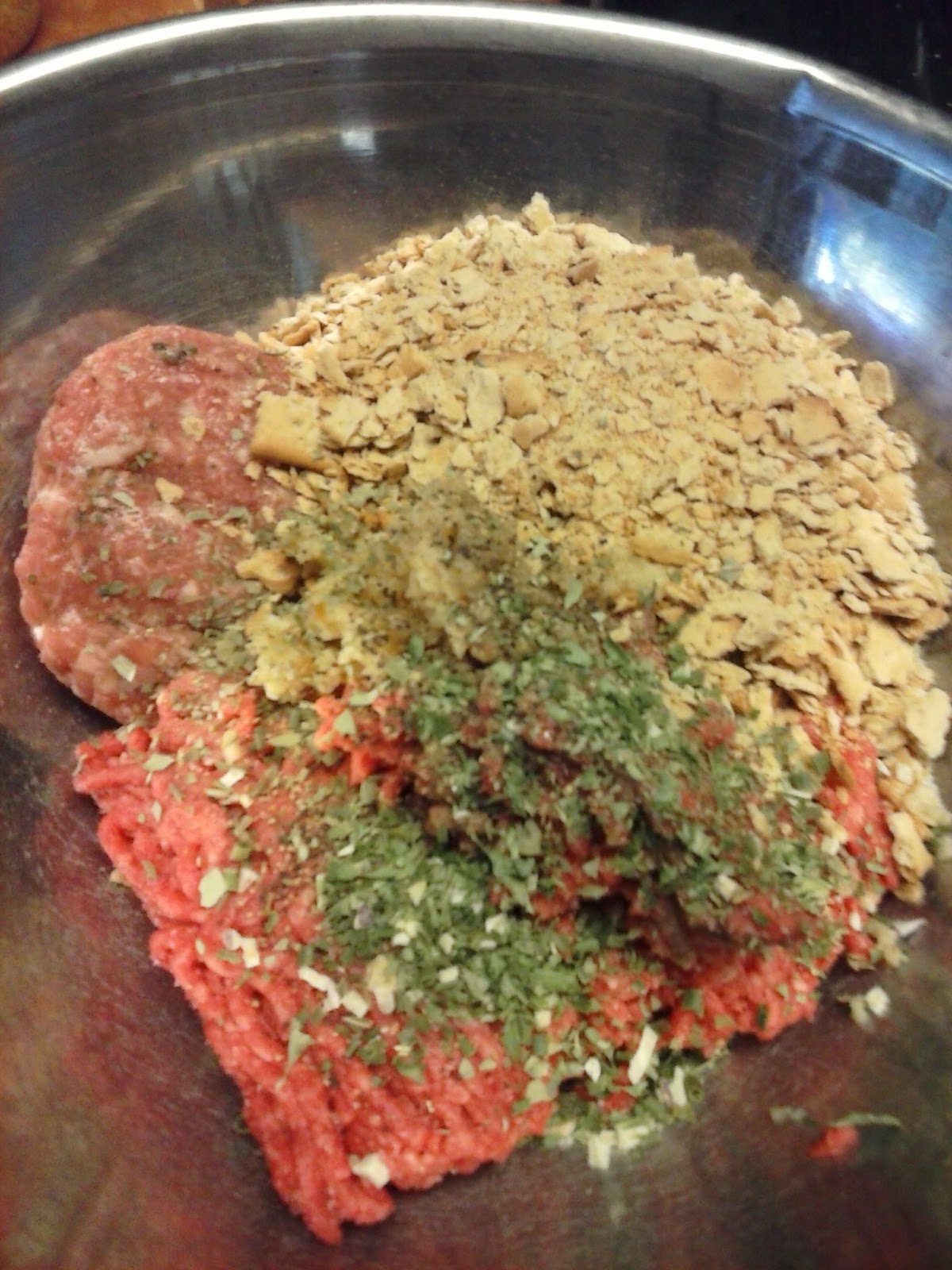 Mix up all that flavorful yumminess ... 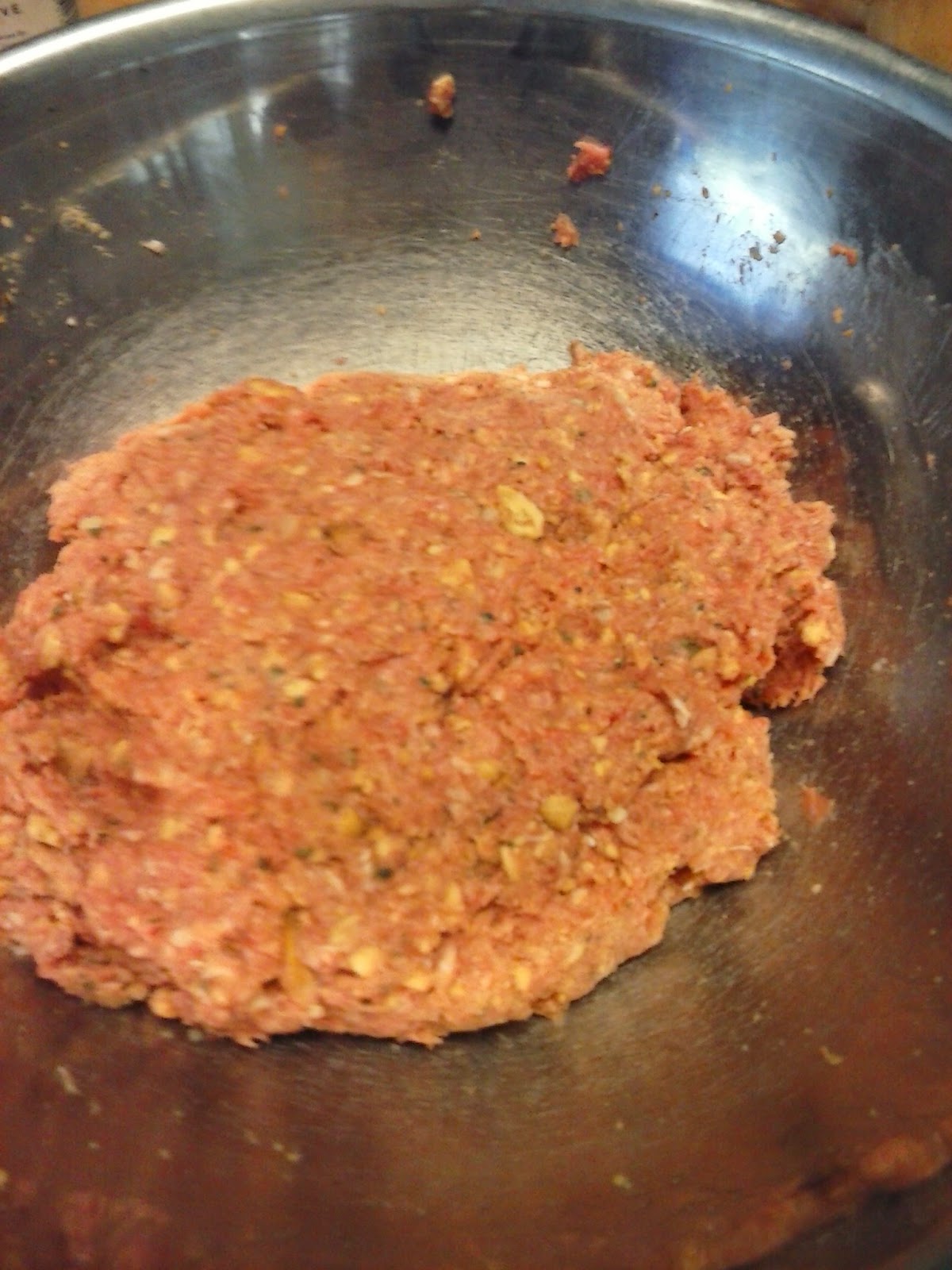 The original blogger over at Pioneer Woman had used a measuring spoon for making tablespoon sized meatballs. How ingenious! I will definitely be doing that for now on. I ended up with 34 meatballs of a uniform shape and size. 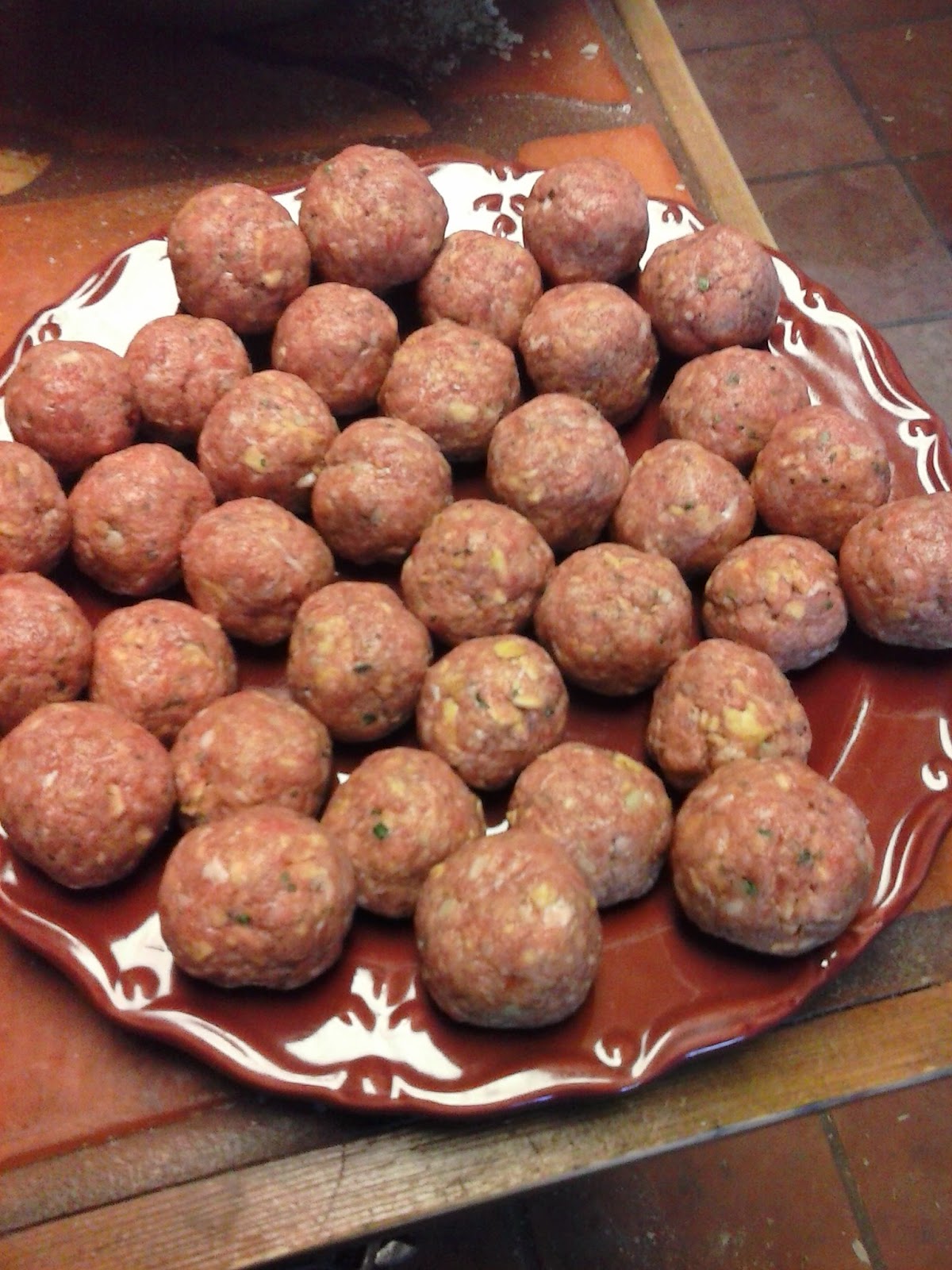 Here's where I used the rehydrated Thrive onions. I really should have used fresh onions but I forgot to get some onions when I went to the store. Yes, I had a list. No, I did not bring it with me. Anyway, I warmed a little bit of oil in my wok and added the onions for more seasoning. 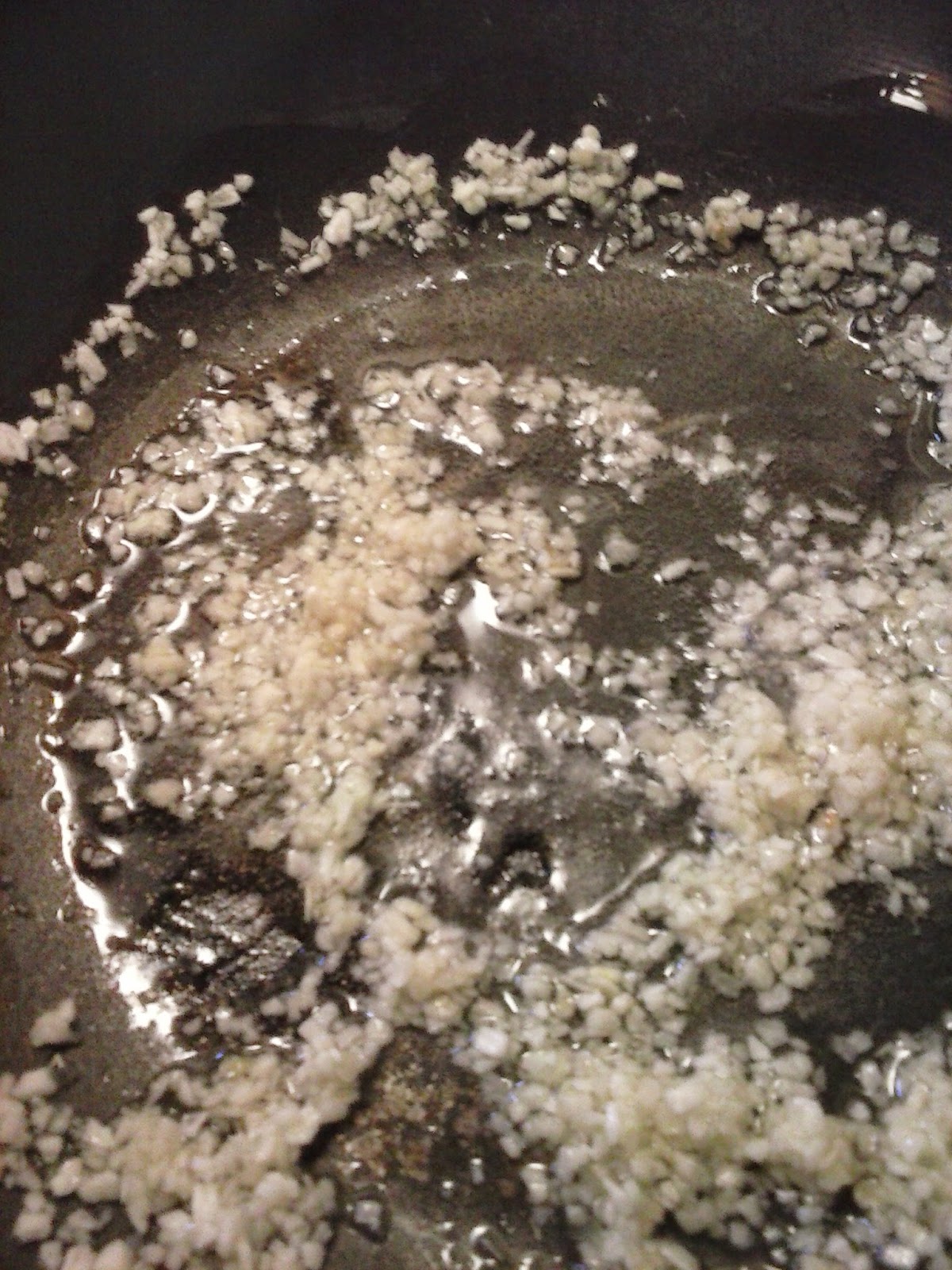 Once the oil was sizzling, I started adding the meatballs just a few at a time until the bottom was reasonably full. I did end up doing the meatballs in 2 batches so that I had room to rearrange them as they cooked. 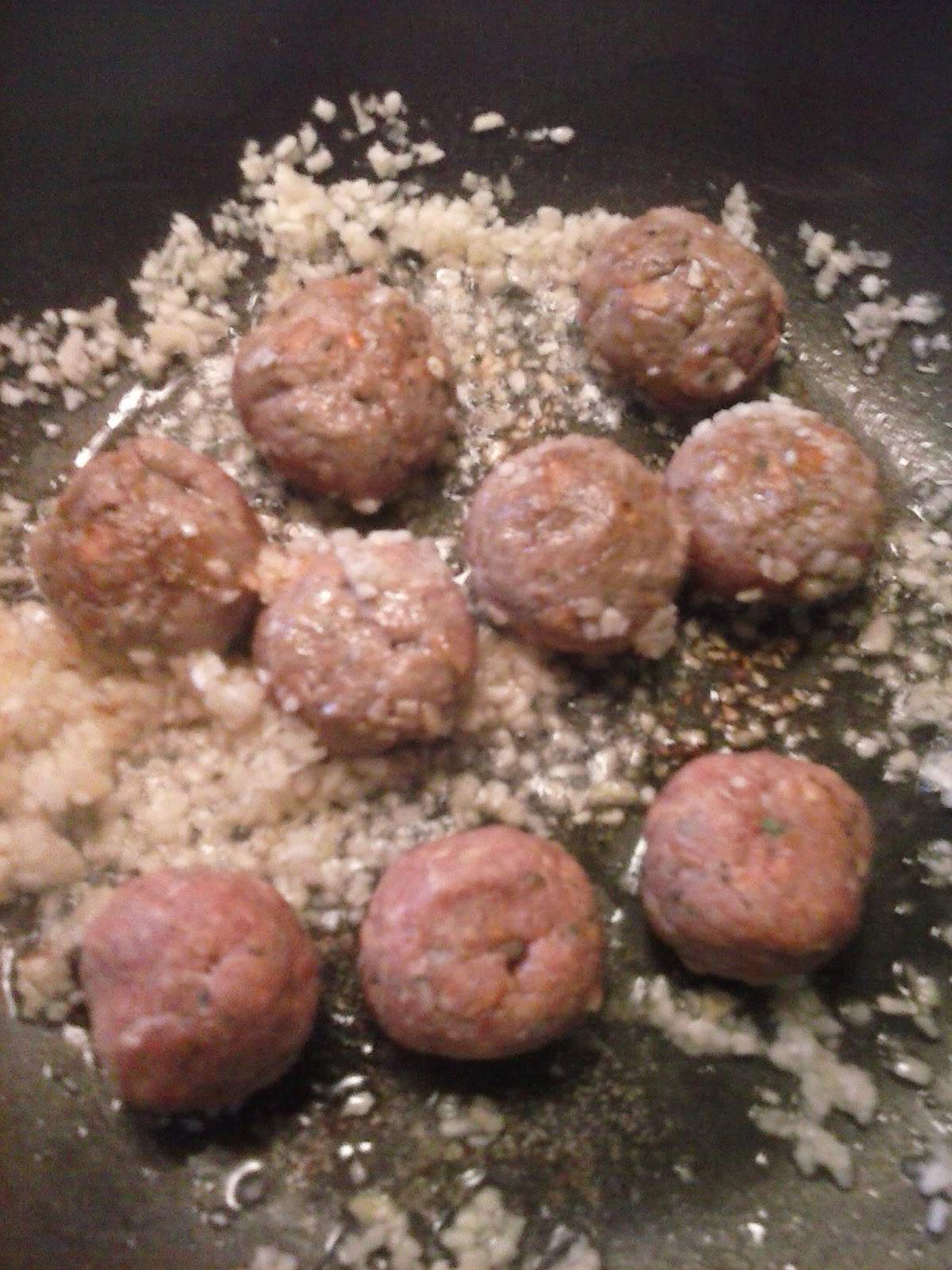 The easiest way to rearrange them? Just shake the pan! As they rolled around they became coated in the onions. Don't they look yummy? 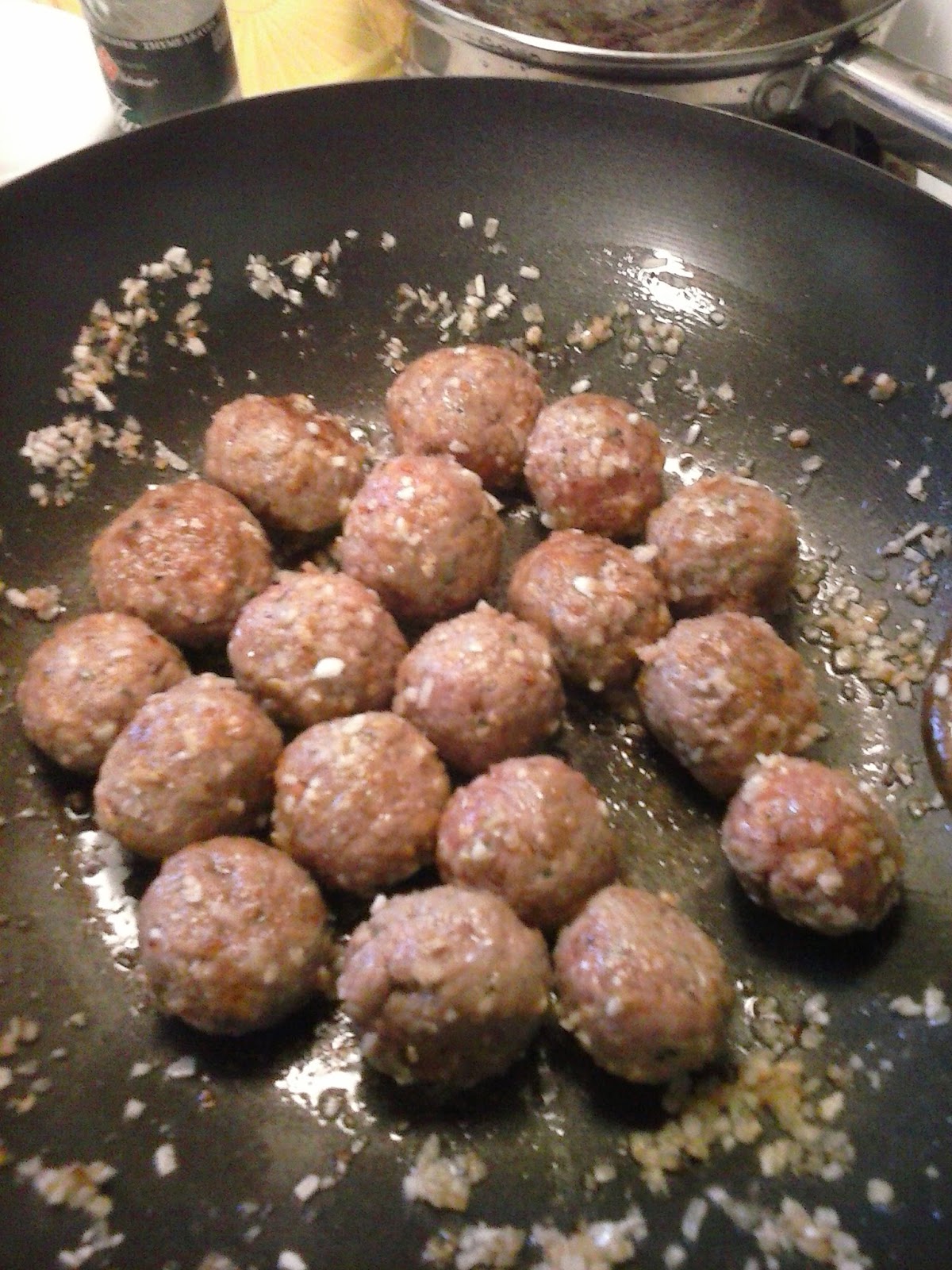 Here is the first batch of meatballs. I realized that at this point I could probably freeze them so I could get two meals out of one afternoon's work. Since I never know when my fibro is going to flare up or when something else will keep me out of the kitchen, I try to make ahead as much as I can while I'm feeling good. At this point, there are no preservatives or artificial chemicals in my meatballs. Just the way I like them! 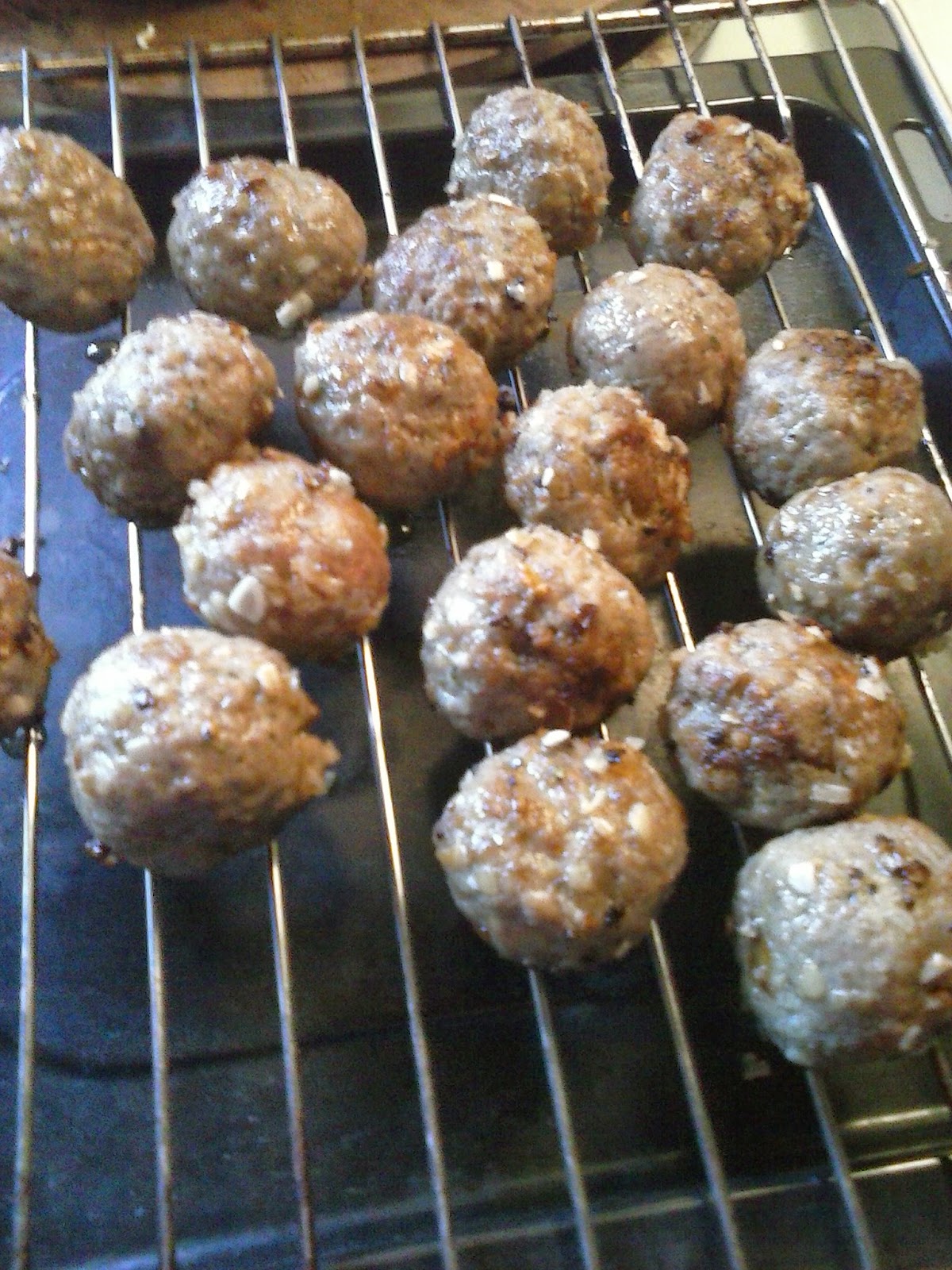 However, since this was a potluck, I put the first batch into the pan when the second batch was done and then dumped a can of Hunt's over the top. Eventually, I will be canning my own spaghetti sauce but until that happens I rely on Hunt's Garlic and Herb because that is the sauce I have found to contain the least amount of added sugar that is still reasonably priced. I let this simmer all afternoon to get the best blend of flavors. 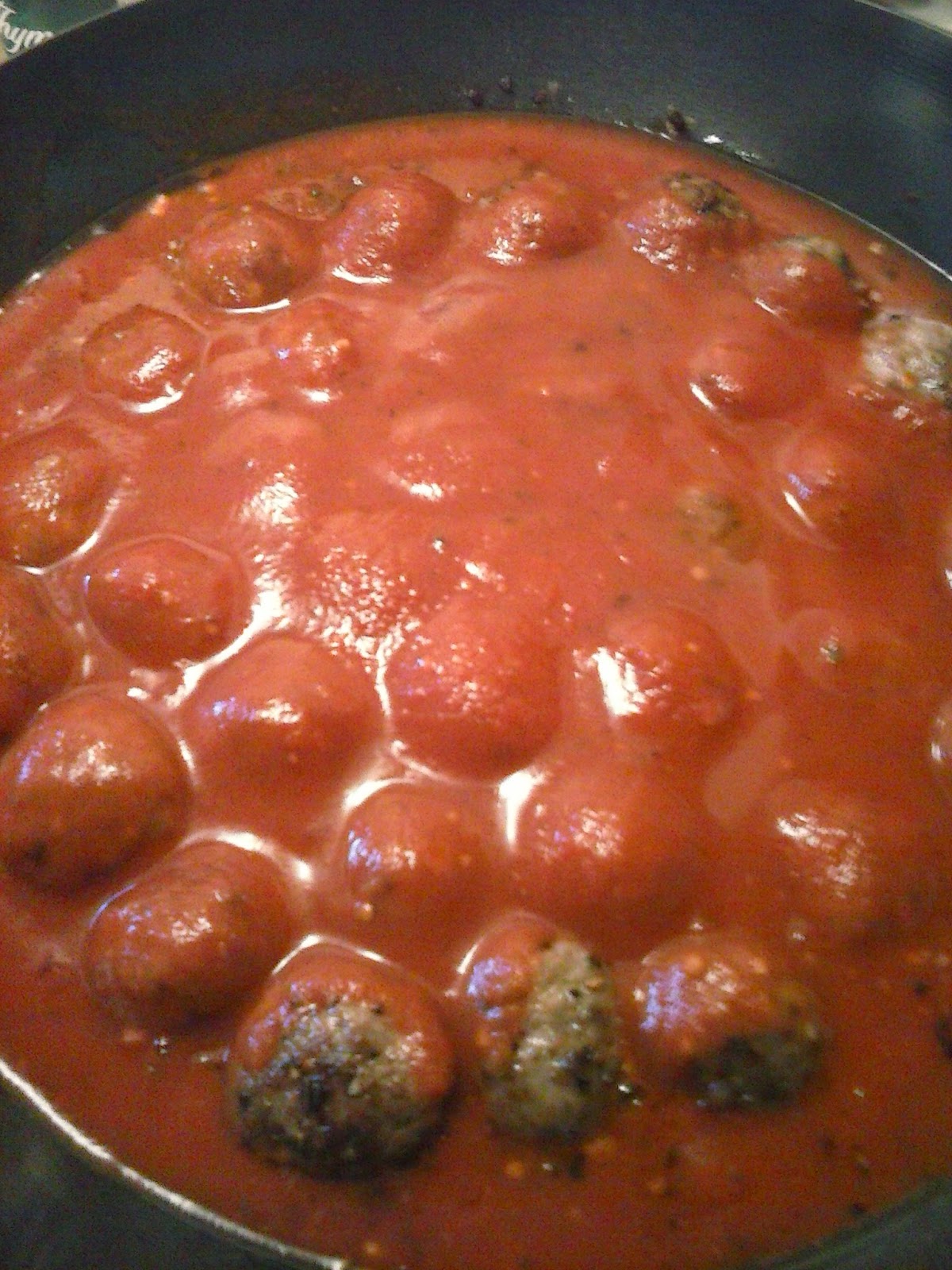 I had planned to make 24 sliders but on my way home from the store, a chicken decided to cross the road. Of course I slammed on the brakes and my groceries went flying. The only thing damaged was two slider buns. I can live with that. I put a slice of mozzarella cheese onto each bottom .... 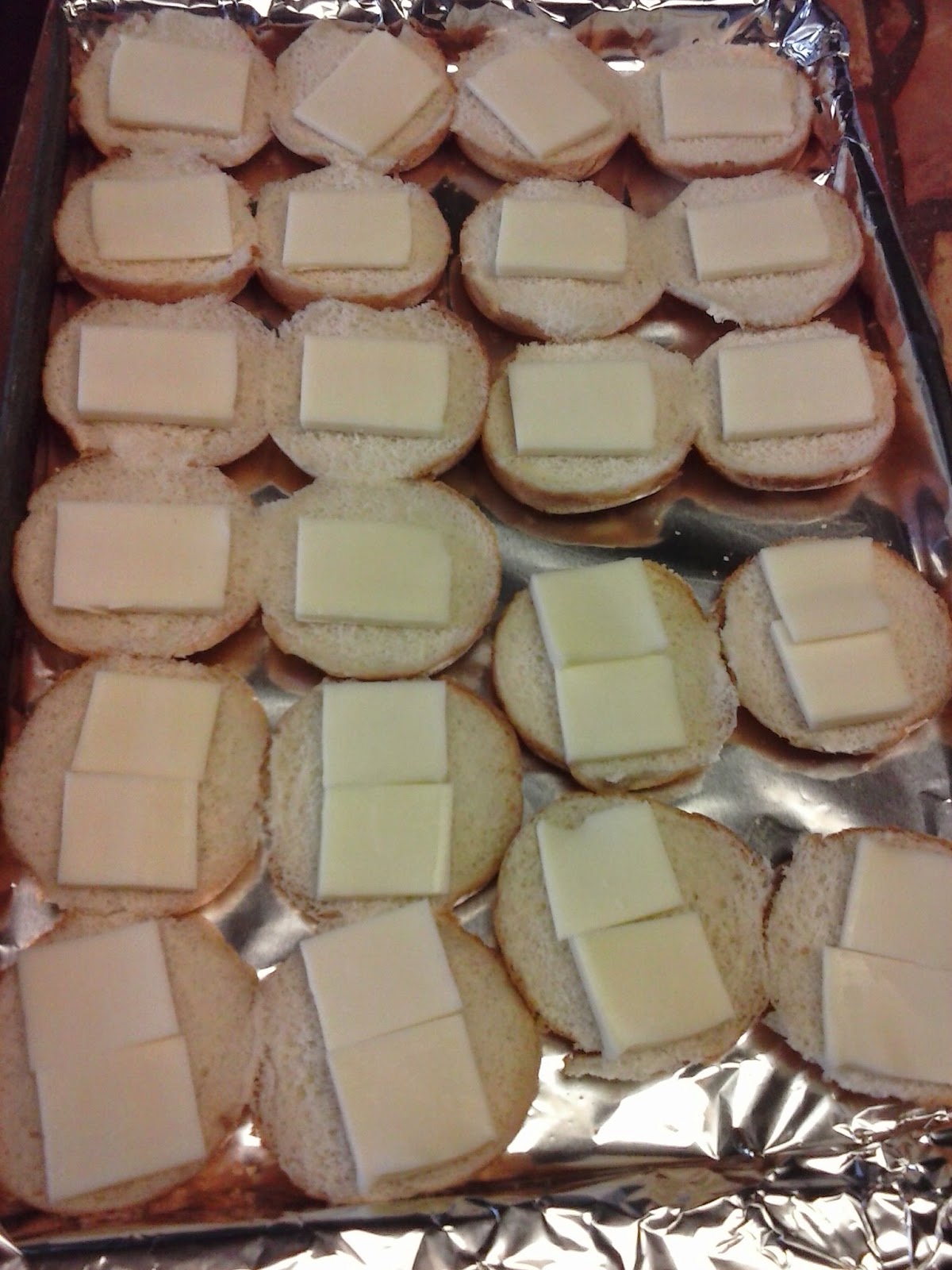 Then a meatball with a little bit of sauce ..... 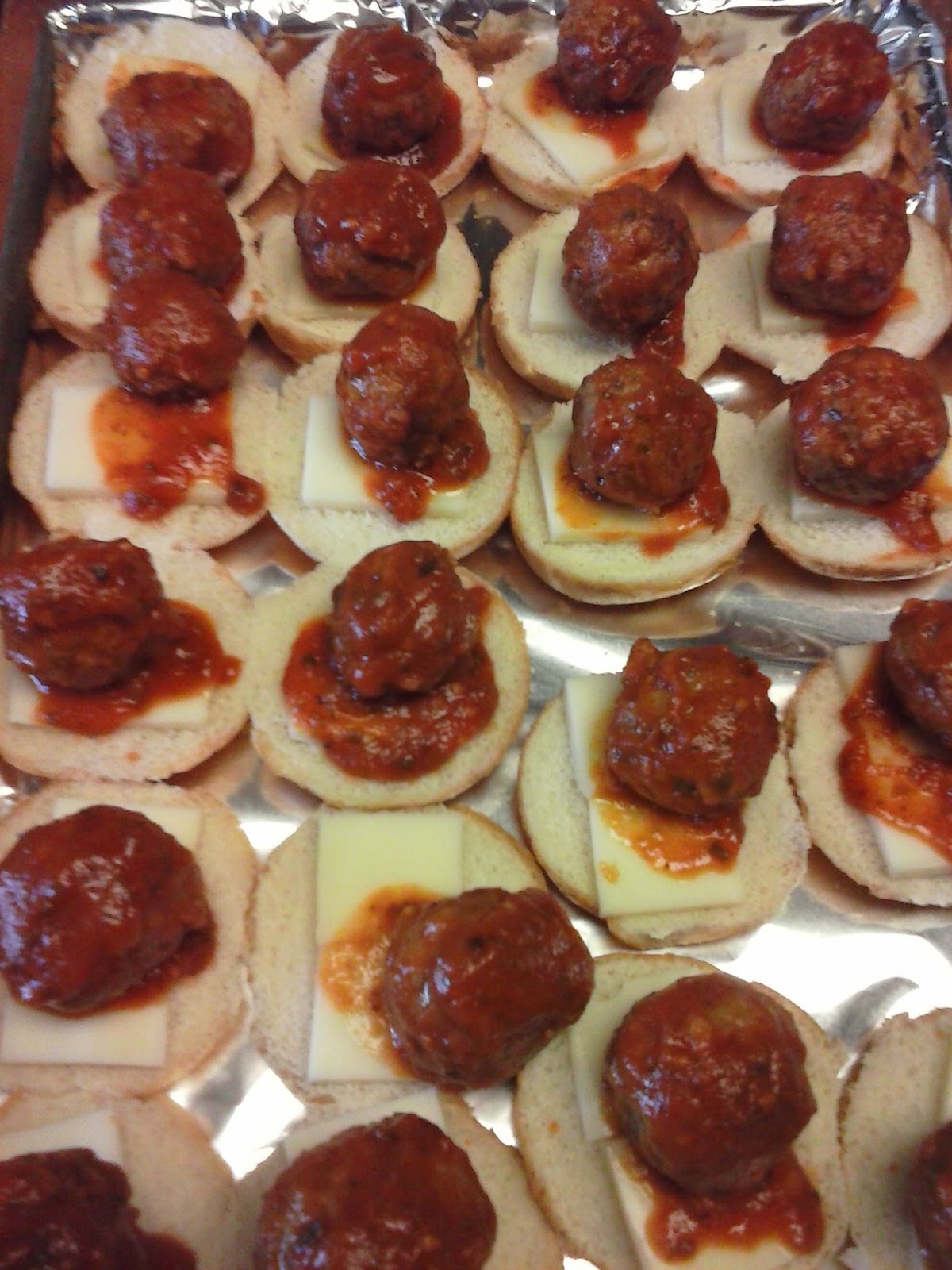 Then finally the tops. I covered the tray loosely with tin foil and when I got to church, I slide the whole works into the oven for 15 mins to make sure it was hot and the cheese was melty. 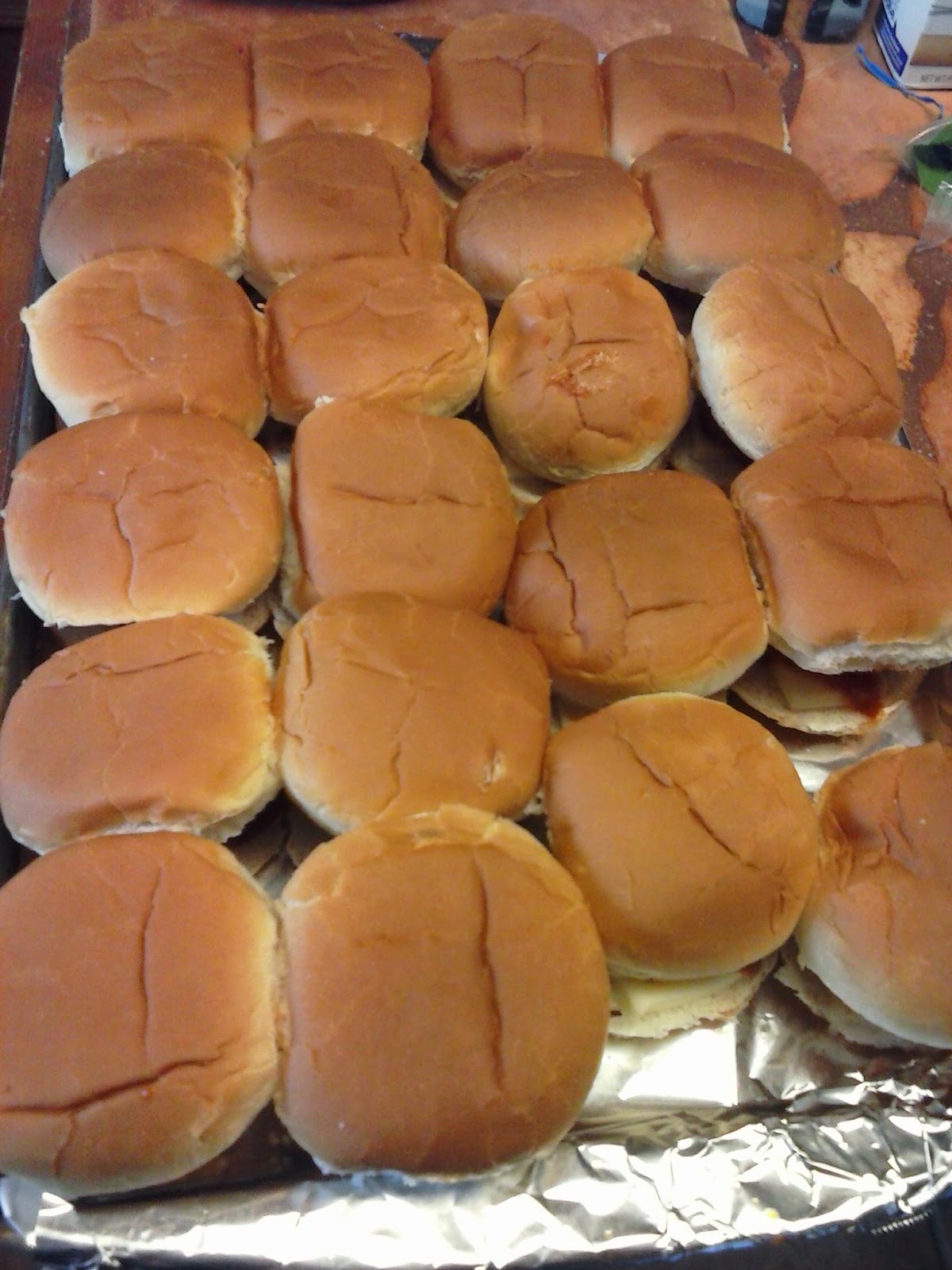 Things I will do differently next time:

Exceptionally great idea. I am trying to get to as healthy an eating style as well. This sounds like a great start!